How poor is Japan?

The Economist has a Daily Chart about Japan being overtaken by Asian Tigers in terms of living standards. As it writes, "most economists reckon that the best way to compare living standards is to take GDP per person measured at purchasing-power parity (PPP)". In other words, the Japanese are now able to consume less stuff then the Tigers, including South Korea in a near future. That is indeed remarkable, when one thinks about where South Korea started in 1980. 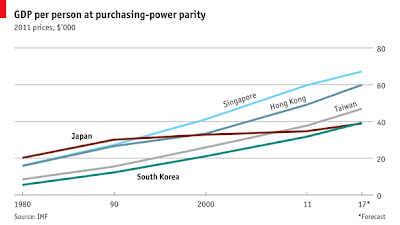 But what is also remarkable is that when GDP per capita is measured at market exchange rates, Japan is still the richest (Taiwan is not in the graph below due to Chinese interference).

Is this because the yen is worth too much, boosting Japan's GDP per capita at market exchange rates? The yen has indeed been appreciating quite a lot against the dollar since 1980. Or is it because goods are too expensive in Japan, reducing people's purchasing power? Maybe goods are too expensive because Japan is too protectionist, not allowing cheap Chinese goods to flow in. Or maybe its goods are of higher quality, something PPP exchange rates capture rather imperfectly.


So here's what's weird. When the Japanese travel to the US, there are much richer than the Koreans. But back home, they both live as comfortably. Do they really?
Posted by Pierre-Louis at 6:00 PM
Email ThisBlogThis!Share to TwitterShare to FacebookShare to Pinterest

Interesting when you compare the two graphs that for South Korea, there is a kink around the time of the Asian Financial Crisis (96/97) in the second graph, yet not in the first.
Maybe it just reflects the crash of the won vs the $US at this time.

We also tend to assume that GDP measures ($US or PPP) are perfect yardsticks for measuring living standards.

In fact, we know there is a vast literature that refutes this. I'd be interested to see comparisons of other measures for Japan and South Korea. Perhaps we should think about living comfortably as incorporating other aspects of life than how much stuff we can buy.