Spending time on the beach in Greece is a great opportunity to read books. Last week, I managed to read two.

The first one is Identity Economics by Akerlof and Kranton, which, while summarizing the duo’s research, makes the case for adding an identity component to economics’ utility function. It argues that we humans take decisions and set objectives based on who we want to be. Failing to reach such identity results in utility loss. Hence, better stick to who you really are to maximize your utility. Whites should not try to act black. White men can’t jump and end up unhappy.

The authors claim that this new tool explains a wide range of phenomena, such as gender and racial discrimination, which traditional economics had left unanswered.While their ideas are good, their bold statements of a new paradigm are quite annoying. Nothing in the book is really illuminating. All in all, Identity Economics provides an interesting framework to analyse economic phenomena but a boring read.

The second book I read was Natural Experiments of History, a volume edited by Jared Diamond and James Robinson. As natural experiments always make an entertaining read in economics articles, I thought this volume would provide many such insightful stories from historians and anthropologists looking at Polynesian islands, settler colonies, banking system evolutions etc…

But again I was a bit disappointed. Non-economists write to describe, not to test a hypothesis, which makes it hard to follow their reasoning. The chapter by Diamond turns out to be material from Collapse. The 3 chapters written by economists, i.e. Nathan Nunn’s on Africa’s slave trade (see graph below), Acemoglu’s on the spread of the French revolution, and Banerjee’s on colonial institutions in , are more interesting but are just remnants of their published papers.

The book aims at convincing historians to use comparative methods, i.e. natural experiments, instead of focusing on just one topic when doing research. This might actually work. For the uninitiated reader, this book provides many enlightening stories. 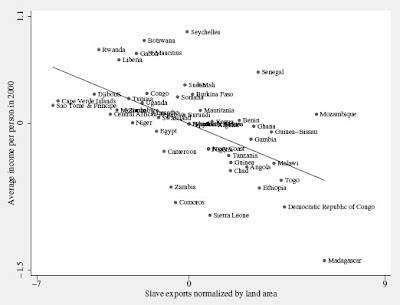 Peter Leeson, the economics of pirates guy, has a new paper on gypsies:


Gypsies believe the lower half of the human body is invisibly polluted, that supernatural de…lement is physically contagious, and that non-Gypsies are spiritually toxic. I argue that Gypsies use these beliefs, which on the surface regulate their invisible world, to regulate their visible one. They use superstition to create and enforce law and order. Gypsies do this in three ways. First, they make worldly crimes supernatural ones, leveraging fear of the latter to prevent the former. Second, they marshal the beliefthat spiritual pollution is contagious to incentivize collective punishment of antisocial behavior. Third, they recruit the belief that non-Gypsies are supernatural cesspools to augment such punishment. Gypsies use superstition to substitute for traditional institutions of law and order. Their bizarre belief system is an efficient institutional response to the constraints they face on their choice of mechanisms of social control.

Posted by Pierre-Louis at 8:27 AM No comments:
Email ThisBlogThis!Share to TwitterShare to FacebookShare to Pinterest

The cost of EMU membership in the crisis: A comparison of Finland and Sweden

Admittedly, Sweden and Finland are not exactly alike and I am sure a Swede or a Finn will not like that I use the two countries in the sense of this quasi experiment. But some things they have in common: both face similar trade costs, both have a highly educated workforce, both have rather decent macro management in place and both are highly integrated in and dependent on the world economy. Most importantly, both produce and export similar products and the service sector is a main contributor to employment and GDP. For both, the EU is the main trading partner (though Russia is very important for Finland as well).

Despite the millions of differences between the two countries the key difference is that Sweden has an independent monetary policy and Finland is part of the euro zone. The consequences of which are perfectly seen in the following graphs which should make it into the next editions of textbooks that describe the Mundell-Fleming logic à la IS-LM-BP. 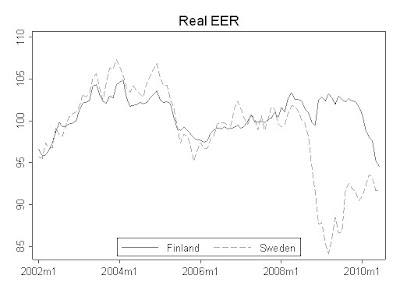 As the crisis unfolded, most countries started reducing policy rates. So did Sweden. While the ECB reduced also its main rate the change for Sweden was more pronounced. Together with other monetary policy measure this lead to a strong depreciation of the Swedish krona. Thus Sweden could gain very early a competitive advantage over its main trading partners while Finland could not (See figure 1). The otherwise close to parallel pattern of the real exchange rate of the two countries diverged and Sweden managed to attain a real depreciation close to 20% while Finland saw no gain in competitiveness until 2010. Only the recent drop in the euro’s value, due to fears about the rising debt level in several EMU members has started to improve the competitive position of Finish exports.

The real depreciation helped Sweden to cushion the drop in demand and led to a much lower reduction in real exports compared to Finland (Figure 2). 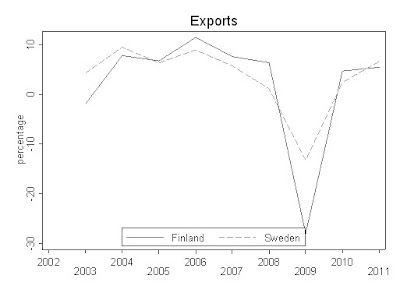 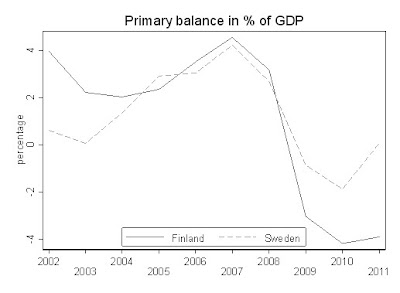 Finland on the other hand saw no alternative to the use of fiscal stimuli while Sweden did not need to increase debt significantly. The primary government surplus quickly became a deficit and contributes currently the fact that Finish debt to GDP outpaces the Swedish ratio despite the fact that for the last 10 years the contrary was true.

Finland pays a high price in this crisis for not having an independent monetary policy in terms of foregone GDP and servicing cost of increased debt. 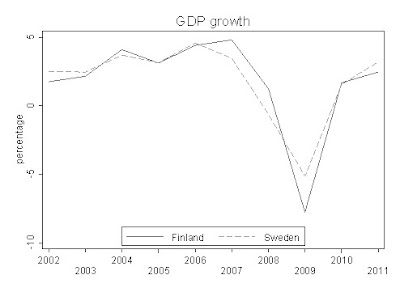 The short sighted conclusion from this comparison is that it is preferable not to peg but to maintain a flexible exchange rate. But this conclusion is deeply flawed for several reasons. First, it considers one particular, negative shock and says nothing about the past benefits of being EMU member nor does it tell us anything about what might happen in response to a potential positive shock. Second, the counter factual is likely to be wrong. In a world where Finland has not been part of the EMU many others may not have been. Thus in the counter-factual it is likely that all these other “would-be non-EMU-members” could have forced interest rates down further and most countries end up with a threat of higher inflation and no competitive gain and no boost of net exports.

Nevertheless, ceteris paribus, being a Swedish policy maker or citizen (who will have to repay the debt) appears to be the more appealing option these days. Too bad that being nearly the same is just not the same.

Posted by Sebastian at 10:37 AM No comments:
Email ThisBlogThis!Share to TwitterShare to FacebookShare to Pinterest

Was the world distribution of income determined in 1500?

Jared Diamond, in his groundbreaking book Guns, germs, and steel, argues that the world distribution of income across countries today was determined before 1500. Hence, his analysis on the causes of such disparities focuses on geographic causes of technology adoption. But was it really set in 1500?

A paper by Diego Comin, Erick Gong, and Bill Easterly was just published in the AEJ Macro. They collected crude but informative data on the state of technology in various parts of the world in 1000 BC, 0 AD, and 1500 AD.1500 AD technology is a particularly powerful predictor of per capita income today. 78 percent of the difference in income today between sub-Saharan Africa and Western Europe is explained by technology differences that already existed in 1500 AD – even BEFORE the slave trade and colonialism. 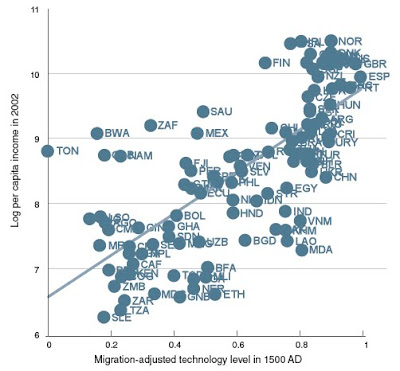 Posted by Pierre-Louis at 9:29 AM No comments:
Email ThisBlogThis!Share to TwitterShare to FacebookShare to Pinterest

Do countries fail to trade because they hate each other?

In a discussion paper that came out 5 years ago, Thierry Mayer and co-author had suggested bilateral opinions were correlated with trade flows. However, the direction of causality was not clear. Do countries hate each other because they don't trade enough or do they fail to trade because they hate each other?

To answer that question, "Freedom Fries", a new paper in AEJ Applied looks at the case of the deterioration of US/France relationships following the invasion of Iraq. From 2002–2003,  France’s favorability rating in the US fell by 48 percentage points and this, the authors find, may have reduced bilateral trade by about 9% and trade in inputs by about 8%. 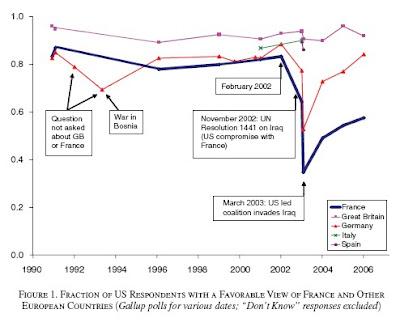 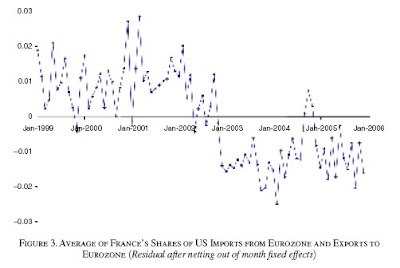 Posted by Pierre-Louis at 5:05 PM No comments:
Email ThisBlogThis!Share to TwitterShare to FacebookShare to Pinterest 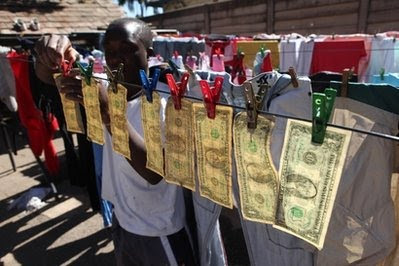 Zimbabwe's coalition government declared the US dollar legal tender last year to eradicate world record inflation of billions of percent in the local Zimbabwe dollar as the economy collapsed.

Low-denomination US bank notes change hands until they fall apart, and the bills are routinely carried in underwear and shoes through crime-ridden slums.Some have become almost too smelly to handle, so Zimbabweans have taken to putting their $1 bills through the spin cycle and hanging them up to dry with clothes pins alongside sheets and items of clothing.It's the best solution — apart from rubber gloves or disinfectant wipes — in a continent where the US dollar has long been the currency of choice and where the lifespan of a dollar far exceeds what the US Federal Reserve intends.