If US cities were countries

OK this map is old and it's the second post I steal from Richard Florida in 2 days. But still, I thought it was interesting enough. New York produces as much as Canada, San Francisco as Thailand, Chicago as Switzerland, and LA as the Netherlands. 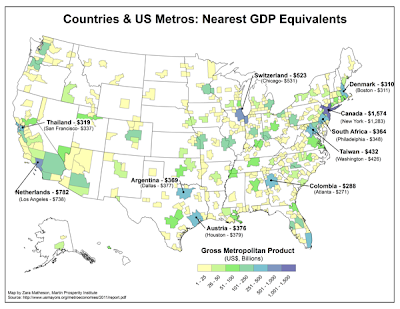 Posted by Pierre-Louis at 12:47 PM No comments:
Email ThisBlogThis!Share to TwitterShare to FacebookShare to Pinterest

Where are the good music groups from?

Last year I became interested in identifying the determinants of good music. Why were some years better than others, why were some countries better than others at producing good recording artists? So far I only managed to examine the time dimension, as the data I had covered mostly the US and the UK. I found that music was better in high-growth years and in high- (but not too high) inflation years.

Now Patrick Adler, a grad student in Urban Planning at UCLA, gathered locational data on the 2012 Coachella acts (Coachella is now one of the biggest music festivals in the US). 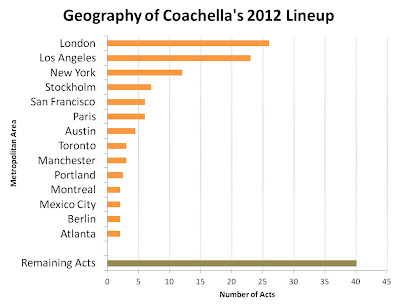 Unsurprisingly, most acts are from London, LA, and New York. What is more surprising is the performance of Stockholm and Austin. If we control for population size, these cities now rank first and second as the biggest suppliers of bands. 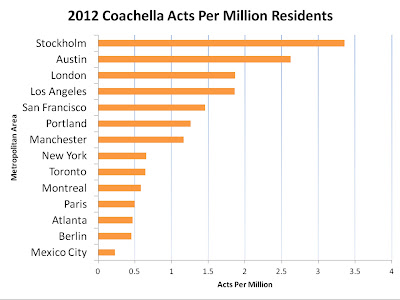 It would be interesting to gather a dataset covering all festivals and then check what are the city-level determinants of good music. For sure, population matters. And so does agglomeration. As Richard Florida, writing for The Atlantic, from which I have taken these graphs, writes, "the world of popular music is spiky. More than two-thirds of Coachella’s international roster of acts (71 percent) hail from just 14 metros.  And four in 10 (43 percent) come from the “big three” of London, LA, or New York."
Posted by Pierre-Louis at 12:42 PM 2 comments:
Email ThisBlogThis!Share to TwitterShare to FacebookShare to Pinterest

Last November The Economist had a special report on the magic of diasporas (discussed on this blog). Most of it was based on Borderless Economics, a new book by Robert Guest, the magazine's business editor. His main arguments are that migrants matter much more than politicians realize, mostly because they help the flow of information between countries and thus create many business opportunities. He argues that the US is well-positioned as it welcomes people from everywhere and makes them feel at home, whatever their background and tastes. He actually devotes a chapter to explain how great the US is. That was unexpected! 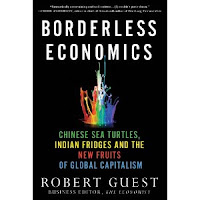 While I didn't feel dazzled by this book, I devoured it effortlessly. The stories it tells are quite entertaining and help us understand how migration helps innovation and commerce. What he doesn't discuss is that sometimes network are a bad thing, not because they exist in organized crime (which he discusses), but because they exclude outsiders who could bring new ideas, and because they favour friends over talent.

At the end of his book he suggests citizens from rich countries should be allowed to go live and work everywhere, mostly because that is much more likely to happen any time soon than the opening of borders to citizens from poor countries.

By the way, this is the first book I read on my kindle and I am now a convinced adept.
Posted by Pierre-Louis at 8:00 PM No comments:
Email ThisBlogThis!Share to TwitterShare to FacebookShare to Pinterest

Why is Swiss unemployment so low?

Tyler Cowen wonders. Any other ideas?
Posted by Pierre-Louis at 2:25 PM No comments:
Email ThisBlogThis!Share to TwitterShare to FacebookShare to Pinterest

Seems like some of the extra virgin Italian olive oil we've been buying may not be Italian after all, nor extra virgin for that matter. Italian olive oil, deemed to be the best, sells at a premium. But very few consumers can tell the difference between a cheap Spanish olive oil and a top Italian one. Hence, the Mafia had an opportunity to make money buying cheap oil from Spain, Greece, Tunisia and Morocco, and re-exporting it as Italian extra virgin olive oil. As the Guardian reports, a "prominent importer, Leonardo Marseglia – appropriately based in a town called Monopoli – has variously been accused of selling cheap non-European oils as Italian ones, fudging documents to shirk import tariffs and forming a criminal network to smuggle contraband."

Apparently, this is an old story. But according to the Guardian, it's still going on. I had a quick look at the data to see if anything weird was going on. First I checked whether there were missing imports of olive oil in Italy, i.e. whether oil from Greece, Spain, Tunisia and Morocco was imported illegally in Italy. As seen below, it doesn't seem to be the case, as Italy imports more from these countries than they actually export (in kg). Where these extra kg come from is a mystery, but it could be that exports are not reported properly in North Africa. 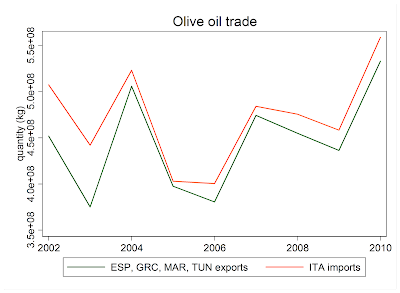 I then checked whether imports from Spain, Greece, Tunisia and Morocco actually predicted Italian exports. I find little co-movement in quantities, suggesting the illegal transshipment may not be so important as to appear in aggregate figures. However, Italy imports much more olive oil than it exports. And if we look at trade values, imports and exports seem to move together. I guess this is because Italians consume more olive oil than they produce while their exports almost pay for it all. Nice gains from trade? 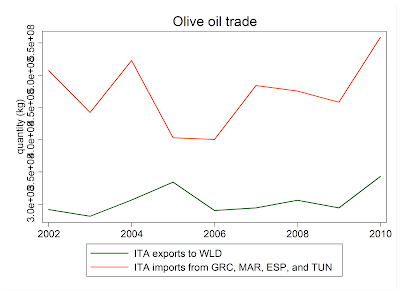 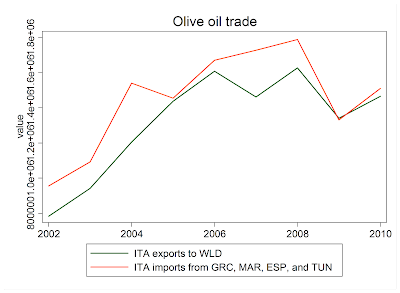