You can do much more with stata than run regressions. Here's how you play blackjack: 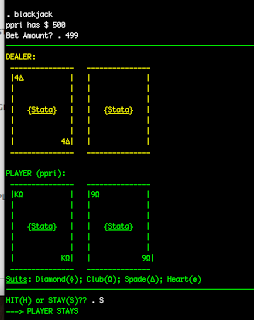 ht: Justin Wolfers.
Posted by Pierre-Louis at 11:31 AM 1 comment:
Email ThisBlogThis!Share to TwitterShare to FacebookShare to Pinterest

Actually an update of this Tilburg-based ranking, based on research produced between 2007 and 2011.

Book review: An economist gets lunch, by Tyler Cowen

Tyler Cowen gets it when it comes to food. He wants to eat tasty stuff at every meal. He knows there is good food everywhere, if you know where to look. And he understands the economic forces that shape food consumption.

His latest book is "An economist gets lunch: New Rules for Everyday Foodies". The two best chapters of the book are “How to find a good place to eat” and “Why does food taste different in the US and Mexico”. The rest is too random, i.e. a chapter about barbecue variations across states, a chapter about which kitchen technology he uses. What?

So why is food different in El Paso and Ciudad Juarez, despite the same population, same geography, and same history? Food-safety regulation, much stricter north of the border, leads to refrigerated but less tasty meat and vegetables, a different selection of cheese, and make it harder to dig a hole for a traditional barbecue.

How to find a good place to eat? Well, he makes many good points without structuring them and convincing us about each of them but here are some rule-of-thumbs. Food is best where labour is cheap, ingredients are fresh, and consumers are informed. Sounds obvious? Maybe, but would you have realized it explains why food in Mahajanga , on the west coast of Madagascar, is much better than in Paris? The fresh seafood, the 5 maids cooking, the shredded green mango, the cucumber salad. As simple as that!

These principles can somehow explain the English food revival as England imports tons of cheap labour from France, Poland, Italy, and Spain that ends up working in restaurants, allowing for affordable labour-intensive delicacies.

Having lived and travelled to a bunch of places I agree with much of his statements, while he may be a bit too quick to generalize from his random observations across Europe. He definitely knows where to eat the best ethnic food in the US, and having had the best Thai of my life from a street cart in Denver, some amazing ceviche in a strip mall in Virginia, and amazing tostadas in the streets of Panajachel, I’m happy to see that such an enlightened thinker validates my impressions.  He understands why a street hot dog in Copenhagen is better than a dinner in a random 4-star hotel.

While all his arguments are good, he doesn’t spend enough time structuring them for a more convincing effect. When reading his book, I get the impression he sat, wrote, and the publisher printed. He seems to want to get it out too fast like a blog post. Some mistakes here and there get irritating. For example, he writes about tacos del pastor, rather than tacos al pastor, or mention food from the Reunion islands. The Reunion is only one island. He translates “sous vide” as slow vacuum, but there is no mention of speed in “sous vide”.

And while he definitely makes it clear that there is an abundant supply or amazing food around the world, the greatest puzzle remains. Why does taste disappear with development? Cheap labour and fresh ingredients disappear (unless cheap migrants come in like in the US or the UK, but then these will disappear with development). As I noted on Rigotnomics two years ago, I never eaten as well as in Madagascar, where zebu carpaccio and mango foie gras are ubiquitous and extremely cheap. In rich countries such as Switzerland, service is boring at its best, food, even in the most expensive places, is ordinary. Now that is a question to address.