The price of civilization by Jeffrey Sachs

When it reviewed Sachs previous book, The End of Poverty, The Economist wrote that the man was "brilliant, passionate, optimistic and impatient." Jeffrey Sachs is indeed a humanist and he wants the world to be a better place. After advocating a big push in foreign aid, he turns to US politics in his latest book, The Price of Civilization. It warns against the rise of plutocracy and the fall in civility. He's not happy that lobbyists control the government, that inequality is at an all-time high, and that many people do not seem to care as they prefer consuming gadgets than minding about moral values. He wants better education, better democracy, and more civic engagment. He then shows convincingly that the only possible way to stabilize debt and "pay" for civilization is to increase taxes on wealth, pollution, and financial transactions. 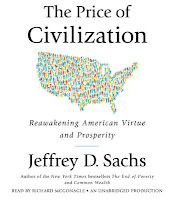 The problem is that his arguments, which would be seen as common sense in prosperous Scandinavian countries, are perceived as anti-American by US conservatives. Indeed, conservatives hate him. For example, the Wall Street Journal writes that his book "is essentially a crusade against the free enterprise ethic of our republic." They argue that his ideal is Europe, and that productivty and innovation is much lower in the latter (which is true but not related to moral values, or is it?). Hence, while his ideas are noble, his facts to the point, and his arithmetic flawless, he's probably only praising to the choir.

Posted by Pierre-Louis at 5:42 PM
Email ThisBlogThis!Share to TwitterShare to FacebookShare to Pinterest